Gorillas in our midst 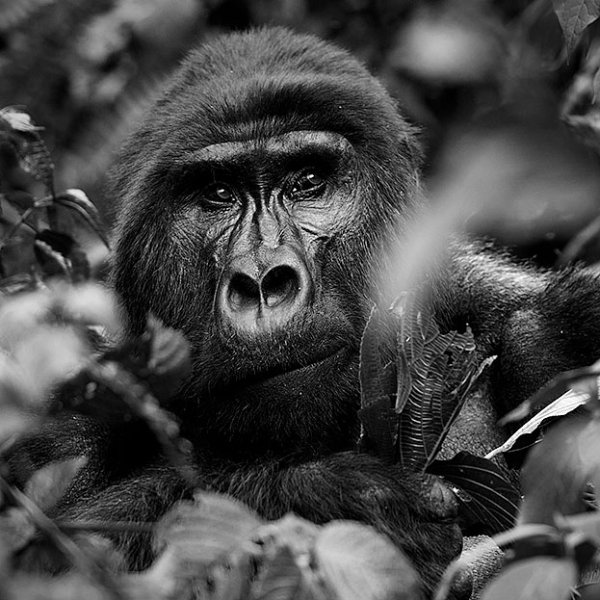 When I first saw the film Gorillas in the Mist, back in 1989, I was enthralled by the idea of observing wild mountain gorillas in their natural habitat. It took 25 years but in June 2014 I visited Uganda and trekked into the Bwindi Impenetrable forest, which is home to half of the world’s critically endangered Mountain Gorillas. The other half live in the Virunga Mountains, which span the Democratic Republic of Congo and Rwanda.

Although I was keen to observe wild gorillas first hand, I was also interested in understanding if 'gorilla tourism' is truly helping to protect Africa's great apes.

Having read Dian Fossey’s book, upon which the film was based, I discovered she was opposed to gorilla tourism – she called it ‘theoretical conservation’ and held the opinion that encouraging tourism ‘fails to meet the immediate needs of gorillas’. Imminent threats included habitat destruction, poaching and disease. At the time of her research the threats were thought to be so severe that mountain gorillas could have become extinct by the turn of the 20th century. 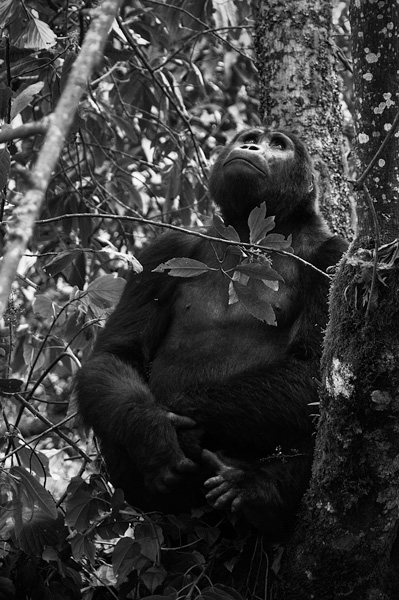 In Fossey’s book, which was first published in 1983, she reported there were an estimated 240 gorillas in the Virunga Mountains. Today, there are about 400, with approximately another 400 in the Bwindi Impenetrable forest and a further 80 in Mgahinga National Park.

Organised tours to view wild mountain gorillas have been around since 1955. These early tourism programs were not well regulated and tended to be more concerned with making money rather than conservation.

These days there are a number of rules that are implemented and observed to protect both gorillas and tourists. These include:

From my experience, the ‘7 metre’ rule is the hardest one to implement with wild animals, roaming free, in a dense forest. On my first trek we came across half a dozen gorillas from the Bweza Group. They were up in the trees relaxing and snacking on the leaves, so keeping our distance wasn’t a problem. However, once our hour was up and we started to move off to find somewhere suitable to have a spot of lunch, we found ourselves within 1 metre (3 feet) of a sleeping gorilla in the undergrowth to our right. We couldn’t move to our left, as there was another sleeping about a metre away in that direction. We moved forward as quickly and as quietly as we could – something which is pretty tricky in an ‘impenetrable’ forest!

During my second trek we visited the Kahungye Group, which consisted of 20 members. Gorillas spend a large part of their day feeding and when we reached the Kahungye they were spread out in the undergrowth. A few were clearly visible eating leaves and twigs. The only sign of the others was the rustling of foliage in the distance. A silverback’s role is to protect the group. At one point we must have come between Rwingi, a young silverback, and other members of his group: he came up behind us; sat and watched us watching him for while, before he stood up and beat his chest, whilst leaping past us to rejoin his group. Ian Redmond caught the whole thing on video.

When I visited there were 8 habituated groups in Uganda that tourists could visit all year round. At present it costs $500 per permit. With 8 permits per day, per group, gorilla tourism brings in an estimated $960,000 (£560,000) a month in the high season, from the sale of permits alone. When you add in all the other money tourists spend while visiting (accommodation, transport, food, drink, souvenirs etc), gorilla tourism is an important source of income - not only for the Ugandan government but also for remote communities in the region, where jobs and business opportunities have been created. A number of local community projects also benefit from a slice of the money raised directly from the sale of gorilla permits. 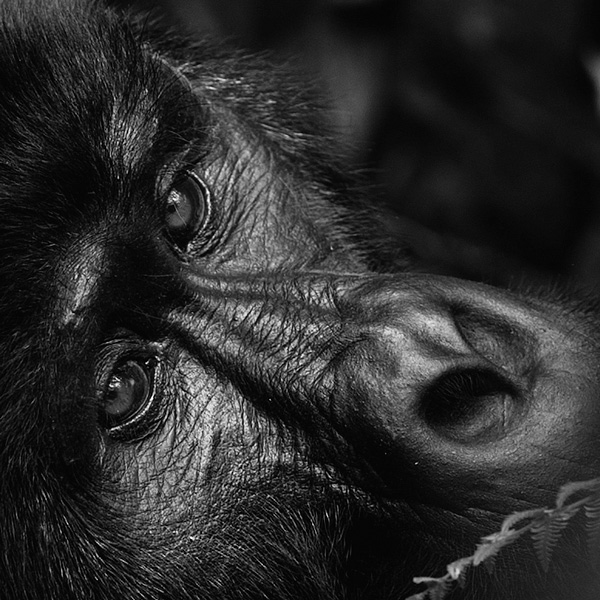 As with most things in life, not everyone benefits from change. There have been some notable winners and losers with the rise of gorilla tourism. In order to protect the gorillas’ habitat, the Uganda government evicted forest dwellers from the Bwindi and Mgahinga National Parks in the 1990s. Many of these indigenous hunter-gathers have never been compensated for the loss of their land and livelihoods, particularly the Batwa people.

Whilst visiting the gorillas was my original motivation for taking this trip, I also wanted to meet local people directly affected by ‘gorilla tourism’. So I spent time with a couple of local organisations to learn about their conservation, eco-tourism and education projects.

I spent a few days visiting a number of projects supported by the Mgahinga Community Development Organisation. The MCDO was set up by members of the Mgahinga community that were displaced when the national parks were established in order to protect the gorillas. 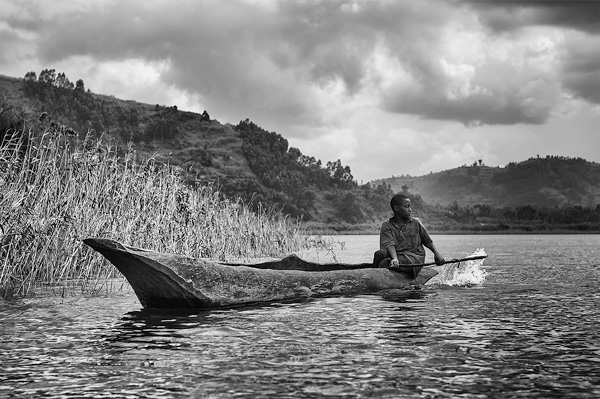 As with many rural communities in Uganda, the majority of people within the Mgahinga community eke out an existence as peasant farmers. Many still live in very basic conditions with no running water or electricity in their homes.

MCDO's goal is to help these people improve their lives by supporting the development of sustainable projects that benefit the community economically and that preserve the local environment and wildlife.

MCDO have set up an eco-camp around lake Mutanda. In consultation with tour operators they are working out the best way to make this area attractive to tourists, whilst protecting the environment.

They've built simple chalets that overlook the lake and introduced activities such as canoe trips. They've also established a tree planting programme which will produced fruit, provide shade and create a sustainable source of wood for building materials. A local handicraft group has also been set up where women have learnt basket weaving skills and now sell them on to locals and tourists alike. Future plans including building a small shop so the women have a more permanent place to sell their craftwork.

The guest house I stayed in while I was based in Kisoro, is one of MCDO’s original projects. All staff are employed locally and are able to develop their skills to work in the tourism sector. The accommodation may be basic, but the hospitality and service are top notch! 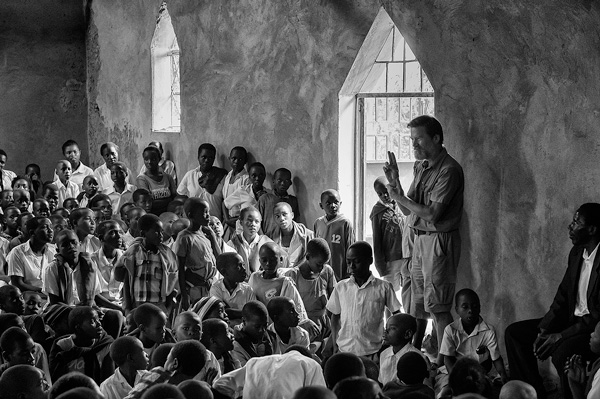 I also spent time with the Gorilla Organisation: a UK based charity that employs Ugandan staff to run a number of grassroots conservation projects designed to address the key threats facing gorillas today. One such project is taking a pedal powered cinema system to remote schools and communities.

The aim of this particular project is to raise awareness of gorillas and the need to conserve them. Many local children have never seen a live gorilla and don’t know the important role they play in maintaining the biodiversity of the forests, despite living in such close proximity to the national parks.

I joined the Gorilla Organisation on their visit to the Kasindi school, along with one of their Trustees, Ian Redmond OBE. The pedal power cinema system was set up in the local church hall where over a hundred children, ranging from 4 to 14 years old, watched a screening of the BBC documentary film Titus: The Gorilla King.

The children were fascinated (some simply to watch a moving image as they don’t have electricity at home, let alone a TV). Most of them couldn’t understand what was being said as it was in English and didn’t have subtitles. However, the real educational value came afterwards when the older children remained in the hall and participated in a discussion about what they had seen and why conservation matters. 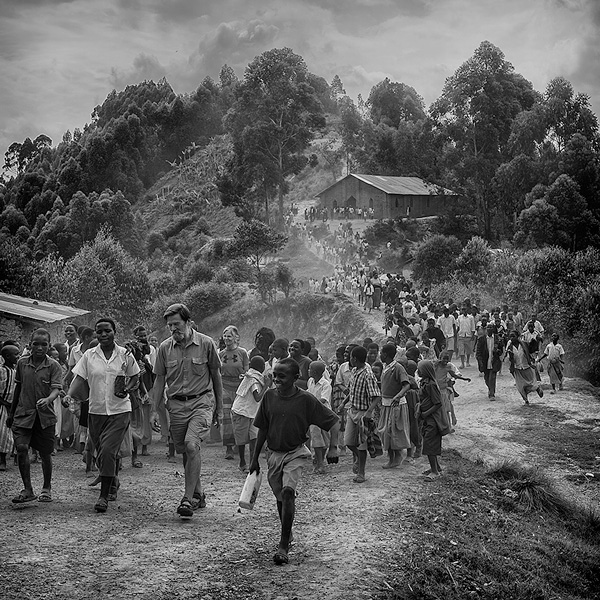 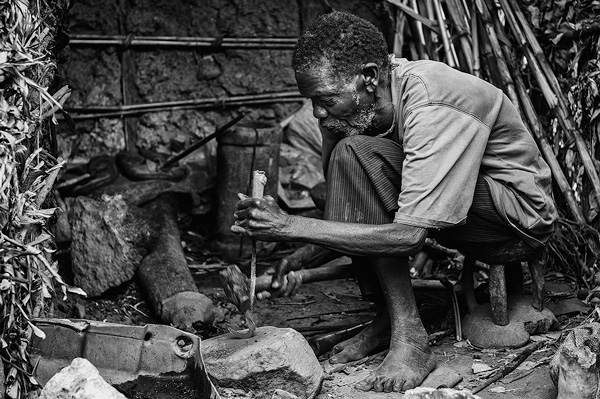 I met some remarkable people, but there is one person who I will not forget - Sebukozo Simion, a local blacksmith.

For me this is a great example of how a local community organisation and a responsible travel company can team up and everyone wins.

Harriet, a tour leader for The Great Projects, was looking to enhance the tour she manages by bringing tourists right into the heart of rural communities, in order for them to get a genuine insight in to village life.

Festo, who works for the MCDO, knew of Simion, who had honed his skills as a blacksmith but had no one to pass his skills onto.

Young people in Simion's community didn’t see the value in his work or a future in his profession. However, this all changed once they saw a ‘mzungu', (a Swahili word meaning a white person), taking an interest in Simion, with many others joining her and purchasing his wares. Now he has a young apprentice who is learning his craft. Simion has not only benefited directly from the sale of his products to tourists, but the regard in which he his held within his community has changed in a positive way – as ‘mzungu’ clearly value what he does, many of them have come to have a greater appreciation of him and his work.

Simion and Harriet, with villagers looking on. 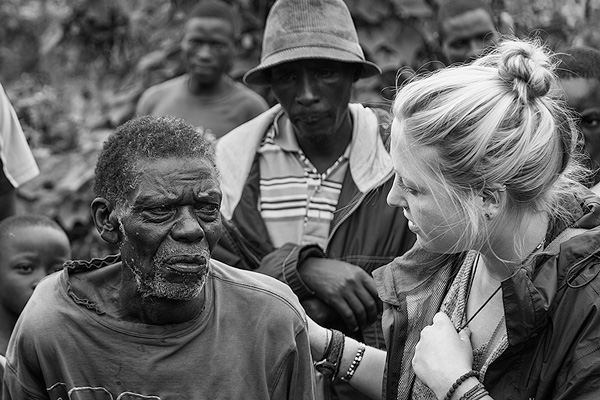 I found the Ugandans welcoming, the country stunning and time with the gorillas thrilling. There is still plenty of work to be done to protect the gorillas and support displaced people, but from what I’ve seen I do believe gorilla tourism is making a positive difference. The mere presence of trackers and tourists in the National Parks acts a a deterrent to poachers and reduces the likelihood of gorillas accidentally becoming caught in snares set for other wildlife. Whilst the tourist dollar and shilling open up employment opportunities to local communities, more fundamental are the educational programmes that are generating a real commitment and passion for wildlife conservation at a grass roots level in the country.

Ian Redmond, who worked with Dian Fossey as a research assistant, also told me that before her dreadful death in 1985, Fossey had begrudgingly started to come round to the idea of gorilla tourism and acknowledged its benefits.

I’m now planning on visiting Rwanda to compare the experience. Hopefully it won't take me another 25 years to make this trip! 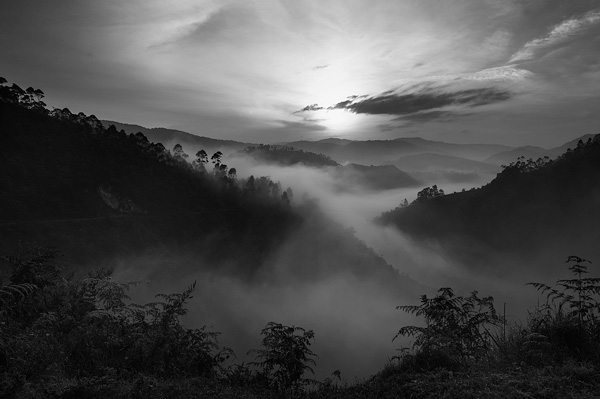